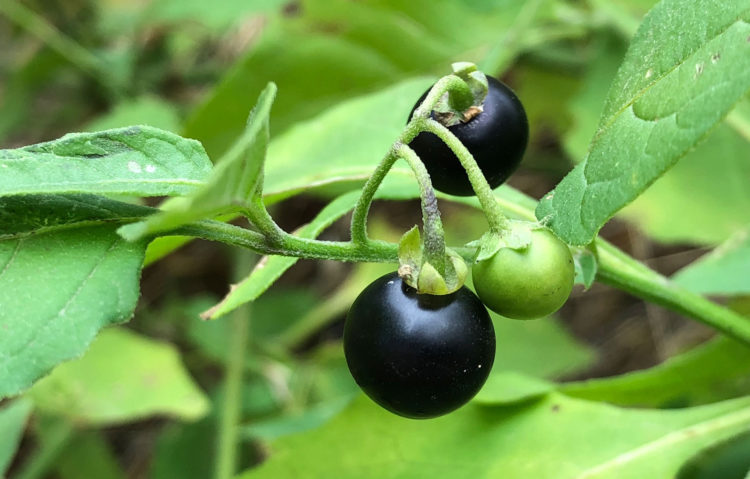 I am just back from the Midwest Wild Harvest Festival, where a big bowl of black nightshade berries (Solanum nigrum complex) dressed the banquet table at Friday’s annual wild potluck. Foragers there are well-versed in the edibility of these diminutive wild treats, which are in the same family as tomatoes, eggplants, and chilies, not to mention a cultivated vegetable called “wonderberry” or “sunberry” that was brought to the prairie states by Volga German immigrants.

There are other toxic nightshades. Bittersweet nightshade (Solanum dulcamara) produces purple flowers and bright red, oblong berries—so if you can tell fire-engine red from black you should be able to avoid eating this one by accident. Other Solanums in our region produce yellow to green berries. This account is only about those that produce purple-black to dark black berries.

Black nightshades are common to disturbed and agricultural areas around the world, including the lower elevations of Colorado and surrounding states, and east across the Great Plains to the Eastern Woodlands. Hence, road stops along my annual pilgrimage to Wisconsin for the festival are often fruitful. I have collected black nightshade in late September around a fishing pond in eastern Colorado, a well-trafficked trail system in Iowa, and a public parking area in Wisconsin. I’ve also found it growing as a common weed in plenty of places around Denver, including a farm where the gentleman leading our tour noted its similarity to the “wonderberry” of his childhood, with fond recollections of his grandmother’s wonderberry jams and sauces.

The black nightshades are sprawling plants whose foliage and flowers evoke that of potatoes or tomatoes, but the leaves are simple rather than compound. The berries are full of soft seeds like tiny black tomatoes. Often, I’ll find a plant loaded with berries whose leaves have started to yellow, dry, and fall. The berries on such plants are usually plenty ripe, which is good as Sam advises sticking to ripe berries without green striping. He also suggests starting with small quantities and working your way up, and to not eat the berries if they taste bitter or unpleasant to you.

To me black nightshade berries are reminiscent of tomatoes, but sometimes have an edge of bitter at the finish, or a bit of bite like a chili. They cook down to the deepest, most brilliant purple. I love them cooked with sugar as a dessert sweet, whether on ice cream or highlighted by whatever baked goods I can dream up.

Savory preparations are fun too, from salads to my latest favorite—cooked with peppers, onions, and pork into a green (purple) chili, to be spooned over tamales, enchiladas, or breakfast burritos. I swear, I need to spend more time in the prairie! For those of you living in parts lower, however, I hope the “wild wonderberry” makes a great new addition to your foraging repertoire, if you are not already eating it. On Saturday I stopped by my sister-in-law’s house, where I was persuaded to help weed her hillside of invasive nodding thistles … END_OF_DOCUMENT_TOKEN_TO_BE_REPLACED Two years ago I was harvesting great quantities of dandelions greens from my back yard—which is located at 10,000 feet in … END_OF_DOCUMENT_TOKEN_TO_BE_REPLACED If you are an avid fan of wild food foraging, then you know the author Samuel Thayer already. His books, Nature’s Garden (2010) … END_OF_DOCUMENT_TOKEN_TO_BE_REPLACED

We are just back from the Midwest Wild Harvest Festival in Wisconsin, where I had the honor of presenting for … END_OF_DOCUMENT_TOKEN_TO_BE_REPLACED I love my Old West town for many reasons, and one of them is rhubarb (Rheum spp.). It is one of the few food … END_OF_DOCUMENT_TOKEN_TO_BE_REPLACED 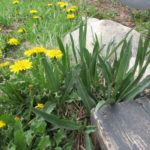 There are many species of edible dock (Rumex spp.), all of which are related to buckwheat and rhubarb. As a … END_OF_DOCUMENT_TOKEN_TO_BE_REPLACED The other day, after years frequenting the same rushing creek in southeast Denver, I finally figured out a way … END_OF_DOCUMENT_TOKEN_TO_BE_REPLACED

Another edible plant I found on my road trip through Utah was red barberry (Berberis haematocarpa syn. Mahonia haematocarpa). It has holly-like, tough leaves with spines on the points—features I am most familiar with in the related, low-growing Oregon grape (Mahonia repens), whose tart, powder-blue berries I enjoy. But this high-desert-loving red barberry is a shrub bearing big, sweet/tart, fruity red berries. It was growing on a dry hilltop amidst pinyon pines (Pinus edulis) and juniper, where it stood out because of all the fruit it bore. I gathered a small sample to study and nibble, but I look forward to collecting enough for a jam or jelly next time I make this lovely plant’s acquaintance! ... See MoreSee Less

I took myself on a solo road trip to Nevada last week, and I’m so happy I did! I have been studying pinyon pines, primarily our local two-needle pinyon (Pinus edulis), but I wanted to check out the singleleaf pinyons (P. monophylla) of the Great Basin too. They are having a mast year there, so the trees and ground were covered with pinyon nuts of many colors, shapes, and sizes. Even better, when I pulled into the campground I met a nice Navajo couple up from Arizona to do the same, so we camped and harvested pinyons together for a couple days.

It is a Navajo belief that if you shake the trees, early winter will come—so we just gathered from the ground, talking and telling stories to pass the time. I am embarrassed to say it took some work to keep up with my new 65 and 70-year-old friends, who could go for 6 hours straight. But I learned so much—how they winnowed out the blanks, and roasted and salted pinyon nuts to perfection, not to mention other things like how various other plants are used for medicine, food, and utility, and how to make ash bread and fry bread and nixtamalize corn with juniper ash.

I am counting my blessings for such a wonderful and unexpected experience with new friends—and of course, all the pinyones I’m stuffing my face with right now. ... See MoreSee Less

Here is a neat plant I found for the first time on my cross-country trip last week—purple poppy mallow (Callirhoe involucrata). I first read about this plant in Kelly Kindscher’s book, Edible Wild Plants of the Prairie. Then Sam Thayer chose it to grace the cover of his latest book, Incredible Wild Edibles (2017), and of course included a very useful account.

This relative of common mallow (Malva neglecta) is also low-growing with leaves that are similarly structured, but more deeply lobed. It is also known as “prairie winecups” for its pretty flowers, which I was glad to find too.The green parts and flowers are edible, as is the taproot. Sadly, I didn’t find a place to dig any purple poppy mallow on my trip. The first place I found it had only a couple specimens, and this native perennial should only be dug where there is a healthy population, preferable one that needs thinning, Sam writes. The second spot had a decent-sized population in the mowed grass along an Arby’s parking lot, but I didn’t think Arby’s would love it if I dug up their lawn. So, next time!

Sam shows eastern Colorado as the starting point (headed east) for this Great Plains species, but I didn’t find any in Colorado. The two populations I found were in central Nebraska. These are often cultivated as landscaping plants too. ... See MoreSee Less

If you would like a free issue of the Wild Edible Notebook in PDF form, join the email list! One of these days I'll write with news, updates, or freebies as they become available, and you can unsubscribe any time. Joining the email list takes 2 seconds. Fill your info into the fields below and click "Subscribe."