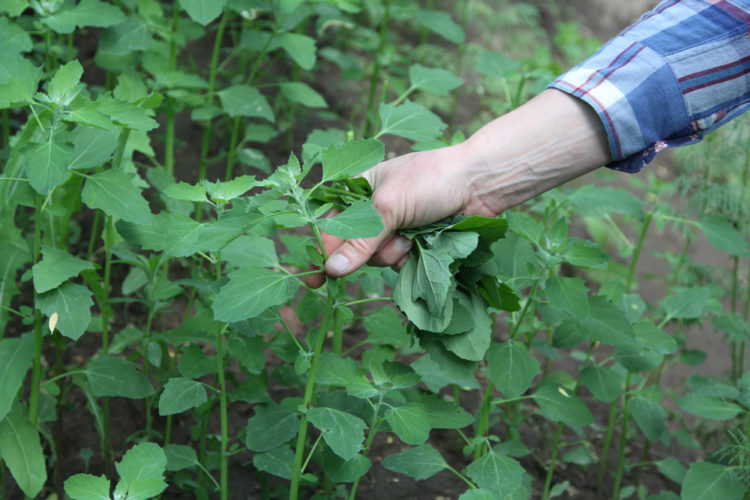 The other day we tore ourselves away from our computers and headed out into the forest in the fading light to sneak in a brisk walk before bed. I have mushrooms on the brain, always, these days, so I was hoping to find some.

Our neighborhood at 10,000 feet on the mountainside at the base of a ski resort is crisscrossed with trails through the forest—some single-track, others wide enough for two to walk abreast—and most abutting micro-mansions that I think could make for stellar ecovillages come the apocalypse. But that’s beside the point.

We descended on a footpath first, then turned on a wider path across a bluff. The light was fading fast so I was eager to gain the road, but in that twilight, we were fortunate to come upon two frolicking fox pups. We watched them for a bit before I noticed the lamb’s quarters growing lush near some blue spruce trees, which must have been planted recently.

Also known as goosefoot or wild spinach, lamb’s quarters (Chenodium album and its cousins) are related to spinach and can be used similarly.

“Wild spinach is one of the most nutritious leafy greens ever analyzed, beating out domestic spinach in fiber, beta-carotene (vitamin A), vitamin C, riboflavin, calcium, zinc, copper, and manganese,” writes forager-author John Kallas, who has a Ph.D. in nutrition, in his 2010 book, Edible Wild Plants: Wild Foods from Dirt to Plate. He does point out, however, that domesticated spinach wins in omega-3s, folic acid, and iron.

Lamb’s quarters have green to greenish-blue leaves that are covered, particularly on the underside and growing tips, with a white, mealy substance upon which water balls up and runs off. The leaves are shaped somewhat like a goose’s foot, hence that moniker. The flowers that come later are small, white-mealy balls clustered on the upper parts of the stems. The stems may have red striping along them.

This is often a weed of garden beds and landscaping. Like a dedicated pup, it follows us  around, much as we have sought it out. In The Forager’s Harvest (2006), Sam Thayer explains that the goosefoot C. berlandieri has been used by native people here for thousands of years, prior to contact with European settlers, who brought their own species of edible Chenopodium to North American soils, whether or not intentionally. There is archaeological evidence for Chenopodium seeds in North America dating back thousands of years, he explains, citing Smith (1992). “Depending on classification, these seeds may or may not represent C. album; but some of them certainly represent plants that would commonly be called ‘lamb’s quarters.'”

This night what interested me were the fresh greens, the flower heads included. I looked for signs of herbicide spray and did not see any, no tortured-growing or dead-deformed plants around. And it was 1/4 mile or so from the nearest road. I decided to gather a batch, stripping off leaves and young flowers from some of the plants.

Up here, in areas that are dry and open or high up in elevation, lamb’s quarters grow to be pitiful little things, sometimes barely taller than my ankle. Such was the case at our old home at 11,000 feet. They never grew big or substantial enough to use for food. But in some places here, when conditions are right with rain and good soil, lamb’s quarters can grow fairly lush. Not often up-to-your-chest lush, as they tend to do at lower elevations, but up to the thigh at least, with leaves that are substantial enough to be worth your time. This weed is a score!

For several years my go-to preparation was cooked as a side dish like spinach. I’d do this when I found enough to bother, because it does shrink down in the pan. Otherwise I’d use it like spinach in other dishes.

This time, however, armed with Dina Falconi’s fantastic book of master recipes, where a myriad of choices of wild and cultivated ingredients can be used in a given recipe, I decided to try my hand at pesto. I used lamb’s quarters for the greens and sunflower seeds for the nuts or seeds. The flavor came out garlicky-nutty good, as to be expected, since lamb’s quarters is such a mild green and there was garlic in the recipe. I was excited to eat wild pesto by the forkful, and spread it on good, toasted bread for lunch. The best part is that many wild pestos can be borne from this master recipe.

The book, Foraging & Feasting: A Field Guide and Wild Food Cookbook (2013), is by Dina Falconi, an herbalist, forager, and cook based in New York’s Hudson Valley. Falconi masterminded the book, which includes plant maps featuring botanical illustrations by Wendy Hollender for 50 common edible plants, information charts, foraging how-to’s, and a cookbook of Falconi’s master recipes. The two raised $115,000 on Kickstarter to pay for production and printing costs for the hardcover book, which is available at www.botanicalartspress.com. Dina was kind enough to share her recipe:

Versatile and nutritious, wild green pesto is a gourmet delight and an herb class favorite. I enjoy serving it as a spread on bread. Pesto, typically added to pasta, tastes great topping whole grains and burgers, and in soups, sauces and dressings. Make it creamy by mixing it with equal parts yogurt, crème fraiche, or heavy cream. In this recipe we can use any wild greens that are eaten raw. While some friends make pesto from only dandelion leaf (very bitter) or nettle (which generally needs cooking to chill out the sting), I suggest using half pungent, aromatic plants and half milder tasting ones. If adding bitter flavored plants, include small amounts—about one-half cup per batch. Please note: I usually triple this recipe, multiplying all the ingredients by three.

* This recipe is reprinted with permission from Foraging & Feasting: A Field Guide and Wild Food Cookbook by Dina Falconi, available at www.botanicalartspress.com.